http://apu.ndhub.net/devices is terrific for remote testing on real devices.

Code snippets table for common use cases with code example

CS001242 - Sending SMS messages in WRT - Does NOT work on my Nokia E71 - This code snippet shows how to send SMS messages synchronously and asynchronously using the Messaging Platform Service for S60 Web Runtime introduced in S60 5th Edition.

Remote Device Access Services - remote testing for short periods of time on real devices -- major boon. Try the camera on each device to get weird POV of the testing bench. And don't forget to DELETE/REMOVE your application after testing...actually it is sort of fun to test the other applications that developers have left behind.

Forum Nokia Device Specifications page. You can also look for which phones support WRT by selecting, "Web Runtime" from the filter.

On June 15th, 2009, twenty thousand (20,000) players will scour downtown Buenos Aires on a wild hunt for a cash prize provided by sponsor. Clues to the hidden treasure will be delivered to cell phones and wireless computers from the heavily branded world around the players. Statues will whisper secrets, billboard copy will deliver text, street performers share tips, a local newspaper club review contains a clue, and the sponsor will SMS text message hints for the game. Quick thinking players with fancy footwork have the best chance to win. Throughout the three-hour game, the sponsor's message will be delivered by product placement and ad-embedded scavenger clues directly to the tech-savvy players. Friends and family can assist on the web or by watching the game's live media coverage spotting the message their team may have missed.

Game Goal: The winner is the first team (or individual) to uncover the answer to 21 clues within the borders of downtown Buenos Aires.The game will have 5 easy clues, 5 medium hard clues, 6 very hard clues, and 5 brain-busting clues.

Teams: Players can form any size teams but 3 to 5 players per team is recommended.

Secondary Game Device: Computer at local Internet cafe with one player in cafe communicating to other team members by cell phone.

Game end: At the end of the game all players will be notified the game is over. The sponsor may choose to add an invitation message for all players to meet at a specific location and party.

Game venue: To be provided by sponsor

Game prize: To be provided by sponsor

Swag: Sponsor and other companies can provide any number of smaller prizes to be placed directly into the hands of the players before, during or after the game.

Game liability insurance: To be provided by sponsor

Time limit: 3 hours. If the game play exceeds 3 hours, then sponsor can terminate game play whenever desired. The game engine logs will fairly determine and verify the winner of the game.

Technical details: Cutlass, Inc. in New York will coordinate Buenos Aires production through HS Latin America (www.hslatinamerica.com) and install its patented game software on Buenos Aires Internet Service Provider (ISP) servers in order for its game engine to respond to 2,100,000 hits from players in the 3 hours of game play.

Travel: Bull will arrive in Buenos Aires on June 9th and scout 50 clues with organizers on June 10th and 11th. For the final game only 21 of the best clues will be used. 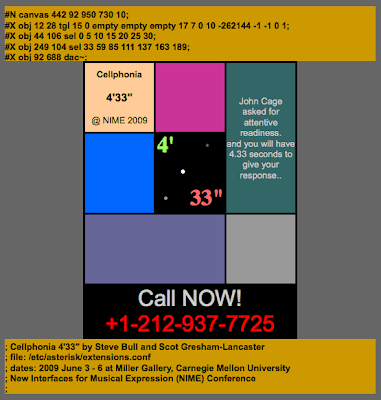 Call: 1.212.937.7725 to add your note (of silence)
Visit: http://cellphonia.org/433/listen.html to see the scrolling score and listen to the installation performance at The Miller Gallery, Carnegie Mellon University.
Commissioned by New Interfaces for Musical Expression (NIME)
Posted by Steve at 6:46 PM No comments: