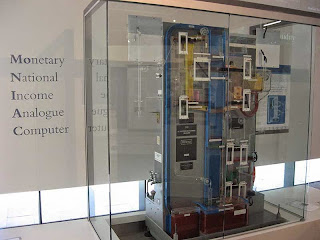 "MONIAC" by Kaihsu Tai - Own work. Licensed under Public Domain via Wikimedia Commons.

I discovered the MONIAC computer this morning in Chapter 1 of Take Back The Economy: An Ethical Guide for Transforming Our Communities by J. K. Gibson-Graham, Jenny Cameron and Stephen Healy. With the first one built in 1949, perhaps only fourteen copies of this water powered computers were made. Using water tanks, levers, opening/closing valves and pipes models of economic change could be "predicted." I recommend you check out this DIY book.

Here's a demonstration of a working MONIAC:
Posted by Steve at 10:03 AM 1 comment: Links to this post