Reinventing Payphones in front of Subway's

On the NW corner of Ludlow and Grand Street, Lower East Side, Manhattan, New York City a 3D model of a future payphone was positioned, along with many others across the city, in support of the proposal Kara-boothie for the NYC Reniventing Payphones competition. 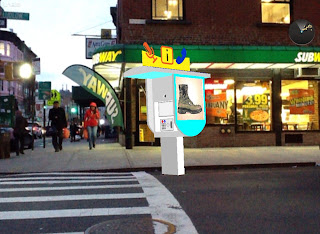 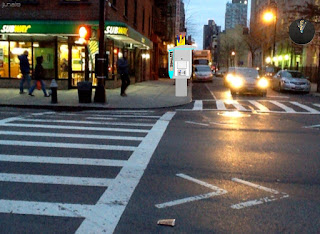 Media Bistro talks about the Frog Design vision.
Posted by Steve at 4:24 PM No comments: Links to this post 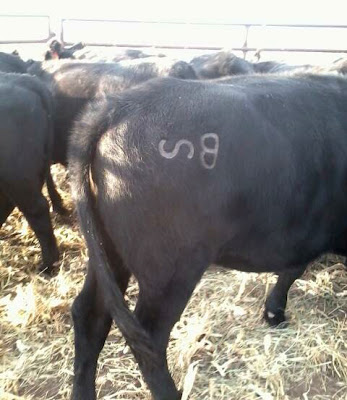 I was prepping last year's taxes when I came across this photo. In 2012, Terese Svoboda and I briefly owned a small herd of hand picked heifers in Perkins County, Nebraska. Our first choice was not to brand them, but then we had to mark their hides to prevent owner confusion. The brand description is Lazy S Backward B that ironically describes these efforts in raising these animals. You'll need to find me to tell you the story. Giddyup!
Posted by Steve at 3:23 PM No comments: Links to this post

This is a developer note about using 3D objects created by SketchUp Pro in Junaio GPS channels. Good news, the process is relatively easy. My comments reference these work-n-progress objects. Since they are imperfect they provide some talking points. 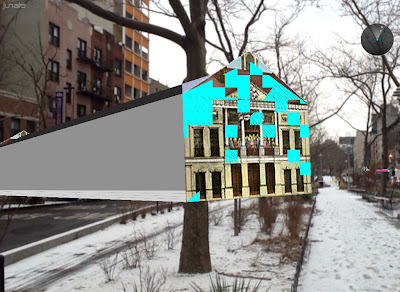 Above is a place holder building for another building that you see as a multicolored splinter piercing the right hand frame of the image. The intent here was to build a simple 3D object near my studio of the 18th Century Federal/City Hall, New York City and later place it over the current historic landmark Federal Hall, the splinter 1.2 miles away.
1. With SketchUp I was able to quickly construct a rough building. However, note that I got the roof pitch wrong, see the roof peak over far end of the building. I used a 256x256 .png file as a single image decal on the ends of the model.
2. I painted the rough model using a gaudy pallet and paint bucket so I could quickly see the 3D shape without having to export the walls and roof into Photoshop, a complexity for another post, and then re-import. However, when I put the 256x256 .png decaal on the building ends, the .png images strobes with shifting pixelation patterns when viewed through the Junaio browser on my iPad2. Perhaps this effect would be an design element asset in another model.
3. I had no drawing of the side of the 18th century building so I tiled the building sides with the SketchUp Pro 'white shingle' texture. The result looked okay in SketchUp Pro, but exported poorly as an .obj. Notice there is just a bottom row stripe of the 'white shingle.'
4. The building is floating. I need to reposition the building to the 'ground' in lat/lon attribute code associated with the object in Junaio. 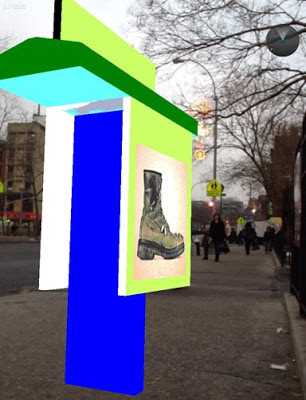 Above is a 3D sketch of a future public phone booth that as a stand-in for the final 3D object I plan to use in the NYC Reinventing Payphones competition due mid-February 2013.
1. Again note my use of bright colors and bucket in SketchUp Pro to quickly define surfaces and edges.
2. The 'ad' on the side of the phone booth strobes with a shifting pixelation pattern. I just got lucky and took this photo when the image was whole--it only took me 15 attempts. But the strobbing might be more appropriate here because it mimics the video ads that now appear on the sides of some public structures.
Posted by Steve at 3:03 PM 3 comments: Links to this post